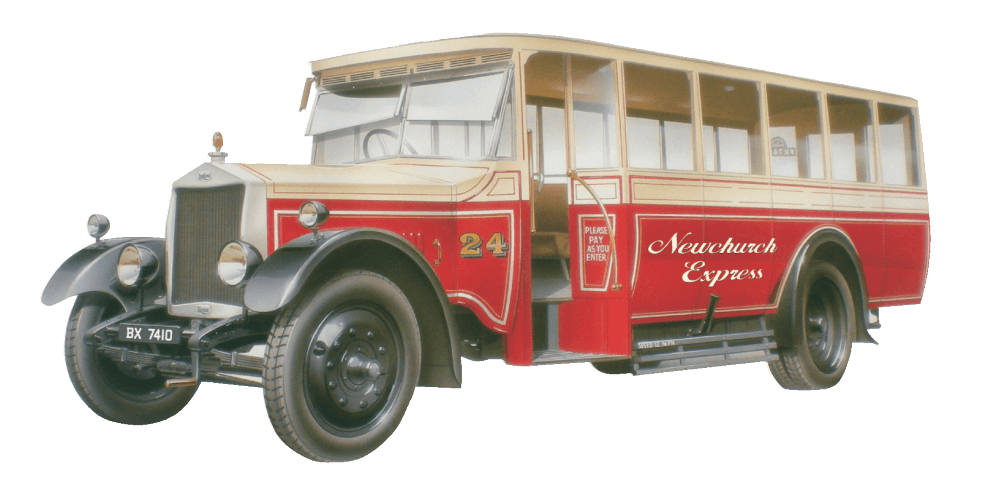 The history of Ffoshelig Coaches can be traced back to David Jones in 1921. Like many operators of the era, David Jones made his living initially by transporting goods with a mule and cart before starting to carry passengers in the years after World War One. His first lorry, a Buick, that was the first motorised vehicle to transport a cow to Carmarthen Market, was converted so it could also carry people in 1921. A tarpaulin roof was added later to provide protection from the elements.

David continued to operate buses and lorries until 1949. His main bus route ran from Newchurch to Carmarthen when vehicles initially carried the Newchurch Pride fleetname. With the introduction of pneumatic tyres, buses were able to travel faster and the name was changed to Newchurch Express, later adopting the name Ffoshelig Coaches, operating from Ffoshelig Farm.

Following David Jones s death in 1977, his son, Desmond Jones took over control of the business until 1996, when Rhodri Evans, the current owner bought the trading name and remaining vehicles.

Current Operations move was made in 2004 to our current location on the outskirts of Carmarthen.

A limited company was established in 2013, operating from its current base, about 7 miles from its origin.

We operate a modern fleet of coaches with seating capacities from 24 to 57, plus 70 seat options primarily for the use of school and youth groups.

All coaches are available for Private and Contract Hire throughout Carmarthenshire, Wales and beyond.

Our uniformed professional drivers all have enhanced DBS (former CRB) checks, and most have many years experience of driving with the utmost care and attention.

All vehicles are maintained to a high standard and regularly inspected in our own workshop.

If you are looking to hire a coach for your group, then look no further. See the contact us page for details on how to book a coach, or indeed coaches for your requirements. Alternatively, you can call our team on 01267 237584 for a fast response.

Like many operators of the era, David Jones made his living initially by transporting goods with a mule and cart before starting to carry passengers...

We offer a selection of vehicles ranging from 24 seat midi coaches, to 43 seat luxury coaches, right up to 70 seat coaches...